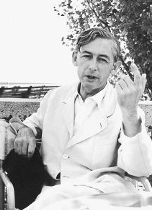 "My movie is born first in my head, dies on paper; is resuscitated by the living persons and real objects I use, which are killed on film but, placed in a certain order and projected on to a screen, come to life again like flowers in water."

Robert Bresson was born at Bromont-Lamothe in central France. The son of an army officer, Bresson initially trained as an artist before turning to the cinema, and he made his first film, a short comedy entitled Les Affaires Publiques, in 1934.

An interesting figure, Bresson paradoxically described himself as a “Christian atheist” and he spent a year in a German POW camp during WWII, and his religious “beliefs” as well as his experiences as a POW coloured many of his films.

His first feature-length film, Les Anges du Péché, incorporates his twin themes of war and religion, drawing unmistakably cynical parallels between life in prison and life in a convent. Les Dames du Dois de Boulonge is based on the novel by Denis Diderot and sows the seeds of the aesthetic which would become known as “Bressonian”.

A Man Escaped is Bresson’s most famous and commercially successful film, and is based on the experience of Andre Devigny, a French activist who escaped prison hours before he was to be executed. Bresson perfected his “Bressonian” directing methods of having his (non-)actors monosyllabically reading their lines, which paradoxically creates an extreme emotional response in the audience. Cannes recognised Bresson’s remarkable skill, awarding him the Best Director prize.

Again focusing on imprisonment and redemption, Pickpocket was Bresson’s next film, and his use of voiceover and dialogue hints at a secret world to which the audience is only partly privy. The Trial of Joan of Arc, based on real transcripts from the actual trial, was Bresson’s next big success, displaying his signature minimalist style and winning over the Cannes jury, who awarded him the Special Jury Prize as well as the OCIC Award. 1967’s Mouchette was banned in some countries for its supposed provocation of teen suicide. Despite the controversy, it won the OCIC award at Cannes and Best Film at Venice.

Lancelot du Lac is based on Arthurian legend, yet the famed Knights of the Round Table are painted as greedy and conniving. This subversive revision won Cannes’ FIPRESCI prize which Bresson controversially refused to accept, feeling that he deserved the Palme d’Or and the prestige and monetary rewards that accompany it. L’Argent was Bresson’s last film, marking the end of an illustrious filmmaking career.

Far from prolific, Bresson made only 13 feature films during his 50-year career, but his impact on the global film industry was significant. His work informed that of Godard, Jarmusch and Hou Hsiao-Hsien, to name a few, and he is widely-recognised as one of the world’s premier cinematic artists. He died on December 18th, 1999 at the age of 98