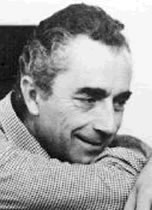 ""Films are born as poems are born in the heart of a poet. Words, images, concepts present themselves to the mind, they are all mixed together, and the result is the poem. I believe it is the same for films.""

Born into a middle class family in Ferrara, Italy, Michelangelo Antonioni studied economics at the University of Bologna, where he became involved in student theatre. On his return to Ferrara, he took up work in a bank, while contributing fiction and film reviews to the local newspaper.

Moving to Rome around 1940, Antonioni fell in with the cinema crowd, variously writing criticism for the journal Cinema and studying at Cinecittà's Centro Sperimentale di Cinematografia, before rejecting the austerity of the prevalent neo-realist orthodoxy. Drafted into the army, he continued to pen scripts for directors such as Roberto Rossellini and Marcel Carné. Around this time, Antonioni began to make short documentaries, the first being Gente de Po (People of the Po Valley) released in 1947, and numerous more on topics such as street cleaners (NU: Nettezza Urbana, 1948) and the manufacture of rayon (Sette Canne, Un Vestito (Seven Reeds, One Suit, 1949)). These shorts were well received - some making their way to Cannes - and on their strength, Antonioni secured financing for his first feature, Cronaca di un Amore (Story of a Love Affair, 1950).

His next feature, I Vinti (The Vanquished, 1952), posited the moral ambiguity that was to become almost a trademark of the director. However, it was 1960's L'Avventura which first brought Antonioni international recognition, and a Jury Prize at Cannes, despite uproar at its premiere. Using a characteristic Antonioni plot device - a search - his less-narrative based, more psychological cinema viewed through an emotionally distant, lingering camera came to mark his distinctive style. With La Notte (1961) and L'Eclisse (1962) these three films form a trilogy on alienation, a theme explored in detail in his first colour feature. Again starring his muse Monica Vitti as Giuliana, Il Deserto Rosso (The Red Desert, 1964) demonstrates perhaps the most striking use of colour, garishly painting the industrial landscape of Ravenna to represent Giuliana's internal life.

Lured from Italy, Antonioni made Blow-Up (1966) in Britain, and then Zabriskie Point (1969) in the USA, before his work became more sporadic. The Passenger (1975), starring Jack Nicholson, again returned to his favoured mode of dreamlike existentialism, reinforced by viscous camera movements across an expansive landscape.

Michelangelo Antonioni was struck down by a stroke in 1985, which left him mute and with limited movement. He has continued to direct occasionally, with the help of others.