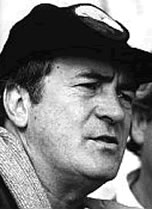 "In the 60s...we were not only telling a story of characters, a plot; but we were very interested in talking about cinema itself. So there were like two movies going on together; the story, and a kind of a essay hidden between the lines."

Born in Parma, Italy, Bernardo Bertolucci was the son of a famous poet, man of letters and film critic. He attended the University of Rome where he became renowned as a poet himself, but never finished his degree. Instead, his father asked a favour of his friend Pier Paolo Pasolini, such that the 20-year old Bernardo served as assistant director on Accatone! (1961).The following year, he took over as director on their second project, La Commare Secca (1962), when Pasolini left to work on Mamma Roma (1962).

Bertolucci followed this with Before the Revolution (1964), a more personal look at youthful sexuality and political idealism, themes to which he would return repeatedly in his career. Increasingly under the influence of the brash, politicised style of mid-1960s Jean-Luc Godard, Bertoucci's made heavy use of text and playful symbolism in his third film Partner (1968), making it something of an oddity in his oeuvre.

Probably the most successful Italian director of the late 20th century, Bertolucci came to international attention with Il Conformista (1970), which remains his most critically-acclaimed film, earning him his first Oscar® nomination for Best Adapted Screenplay. Following a young Italian Fascist sent to Paris to assassinate his mentor, Bertolucci's strict lighting and camera work tell perhaps more about his protagonist's plight - both psychological and physical - than the characters' dialogue.

Recognition for Il Conformista enabled Bertolucci to make larger, more commercial films - the controversial Last Tango in Paris (1972) starring Marlon Brando, and his epic account of 20th century Italian politics, 1900 (1976), with an A-list cast including Robert de Niro and Gérard Depardieu in the lead as youths from opposing ends of society.

Showcasing his penchant for spectacle, lush colour and tendency to the operatic, The Last Emperor (1987) Bertolucci's first English language film, marked his true acceptance on the international scene, winning nine Oscars® including Best Film, Director and Screenplay. Along with his following features, The Sheltering Sky (1990) and Little Buddha (1993) these form something of an Eastern trilogy.

Bertolucci has continued his work in English with another loose trilogy on sexuality and isolation. Stealing Beauty (1996), Besieged (1998) and The Dreamers (2003) all address topics that had been raised in his earlier work, focussing on his favoured themes of sexual and political coming of age.