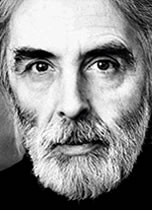 "Manipulation is constant in the media. Even the images of 'reality' on television are manipulated."

Michael Haneke was born in Munich to show-business parents—actor/director father Fritz Haneke and actress mother Beatrix von Degenschild. The family moved to Austria early in his childhood, where he took up acting and the piano as hobbies.

Studying at the University of Vienna, Haneke graduated in philosophy, psychology and theatre—academic interests which have defined much of his directorial career.

Beginning as an editor and screenwriter in 1967 at the German television station Südwestfunk, Haneke concentrated on his dramaturgic leanings from 1970, directing theatrical adaptations of renowned playwrights like Goethe, Bruckner and von Kleist across West Germany and Austria. As with many German directors of his generation, Haneke’s first real start came directing for television—with 1973’s …Und Was Kommt Danach? (…And what Comes Afterwards?)—and he remained primarily in that medium until his feature cinematic debut, Der Siebente Kontinent (The Seventh Continent)(1988). A disturbing dystopian film, it presaged the violent, bare style for which he is renowned, which posits intimate camerawork with non-linear narrative and lingering editing.

The controversy surrounding the bleak violence of Benny’s Video (1992) first brought Haneke’s name to public attention. He deepened his unforgiving investigations into Austrian bourgeois malaise, family and the representation of violence with Funny Games (1997), the last film of his Austrian period, and his first in official competition at Cannes—it divided critics and audiences alike.

He broadened his perspective to a less explicit pan-European feeling of displacement in his first French-language film, Code Inconnu (Code Unknown)(2000), a film initiated by interest from the actress Juliette Binoche, whose own stardom drew Haneke and his work into the international spotlight.

Critical success came at Cannes in 2001, where he won the Grand Prix for La Pianiste (The Piano Teacher), and his stars—Benoît Magimel and the established Isabelle Huppert—took home both the best actor and best actress awards.
Haneke again earned critical success at Cannes in 2005 with Caché (Hidden), for which he was awarded the Prix de la Mise en Scène, or Best Director Award.

In 2009, Haneke was finally awarded the film world's most glittering prize, Cannes' Palme d'Or, for his black and white examination of suspicion and repression in pre-WWI Germany, The White Ribbon.

On the whole, Michael Haneke’s films are provocative challenges to the viewer which rely heavily on his continuing interests in spectatorship, semiotics and the media. He sees himself as “the last modernist”, adhering to a rigorous, intellectual purity and distance uncommon among auteurs today. 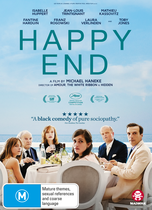