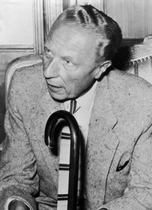 "These happy endings all express the weak and sly promise that the world is not rotten and out of joint but meaningful and ultimately in excellent condition."

Douglas Sirk was born Hans Detlef Sierck to Danish parents in living in Hamburg. His father was a journalist and the younger Sierck also wrote for newspapers during his university years. But it was theatre and cinema that inspired him, having a particular fascination with Shakespeare’s histories. He began studying law at university but shifted to philosophy and art history. During this time he also worked in the theatre.

His debut as theatre director came in 1922, and this led to Sierk becoming one of Germany’s principal stage directors. In 1934 he also started making short films at the Ufa studios, and April! April! his first feature film, was released in 1935. His career as a film director, making films such a La Habanera (1937), earned him respect among the Nazi governors, especially Goebbels. But Sirk was not comfortable in Germany. His second wife, the actress Hilde Jary, was Jewish and after she left for Rome, he soon followed.

By 1941, they were in the US joining the émigré filmmaking enclave in Hollywood. Sirk’s first American film was Hitler’s Madmen (1942), and his second, Summer Storm (1944), was based on Chekhov’s The Shooting Party. Here he worked with actor George Sanders, establishing a long-term friendship, one of the few in Hollywood where he saw himself as much of an outsider and a loner.

However, Sirk did develop close working relationships with producers Ross Hunter and Albert Zugsmith, and with other collaborators like actor Rock Hudson, writer George Zuckerman and cinematographer Russell Metty. It was amongst members of this group that he directed the films that are his Hollywood legacy; a reputation based primarily on ironic melodramas like Magnificent Obsession (1953), All that Heaven Allows (1955), Written on the Wind (1956) and Imitation of Life (1958). But Sirk was not exclusively a director of contemporary “weepies” but also of films such as the Irish swashbuckler Captain Lightfoot (1954), the Korean war film Battle Hymn (1956), and Sirk’s personal favourite, the 3D western Taza, Son of Cochise (1953).

Sirk and Hilde abandoned Hollywood for Switzerland in 1959, due to Sirk’s failing health and uncomfortable with the excesses of a Hollywood lifestyle. At the same time his standing amongst the new autuerist critics in Europe was on the rise, with Jean-Luc Godard writing on Sirk’s 1957 film, A Time to Love and a Time to Die, in the influential journal Cahiers du Cinema. The New German CInema director Rainer Werner Fassbinder was also a fan, making trips to Sirk’s home in Lugano and convincing the retired filmmaker to teach at the Munich Film School. There Sirk made some short films with his students. He died in Lugano in January 1987. 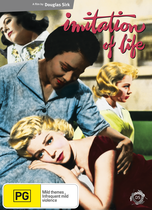