Create a Madman Account Already a Member? Sign In
Madman Feature Films A Walk into the Sea

A Walk into the Sea 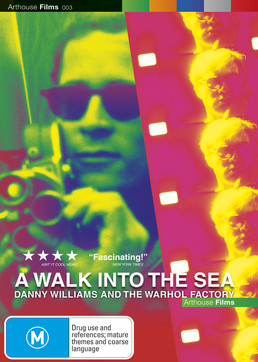 Drug use and references; mature themes and coarse language

A Forgotten Member of the Warhol Entourage

A Walk Into the Sea: Danny Williams and the Warhol Factory is director Esther Robinson's personal inquiry into the truth behind her Uncle Danny Williams' mysterious 1966 disappearance. Virtually unknown today, Danny was Andy Warhol's lover, and a promising young filmmaker.

The discovery of 20 never-before-seen films Williams made during his time at the Factory - and whose many subjects include Andy Warhol, Edie Sedgwick, Paul Morrissey, Brigid Berlin, Billy Name and what may be the earliest known footage of the Velvet Underground - reveals a luminous talent and a stark gap in the historical record. Combined with Robinson's intimate interviews of surviving Factory members, the film gets beyond the icons and quietly dismantles the Warhol myth-making machine, allowing a deeper examination of the human fragility on which Andy Warhol's empire was built.