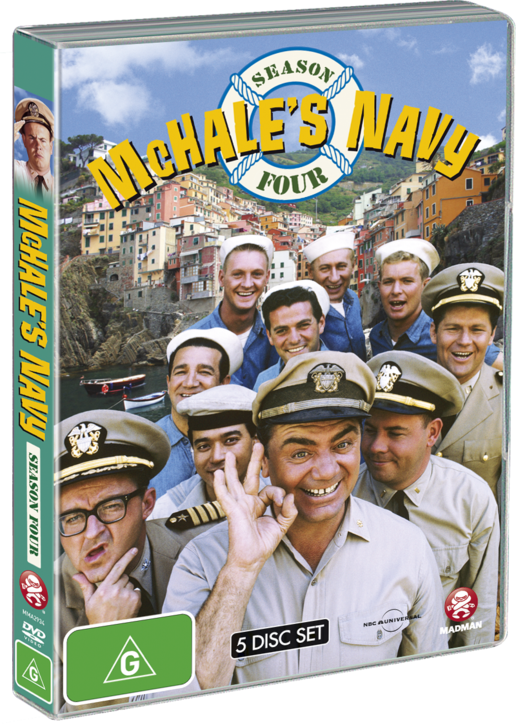 One more season of ship-tipping adventures!

ALL 30 EPISODES FROM THE FINAL SEASON
Lieutenant Commander Quinton McHale (Ernest Borgnine), Ensign Parker (Tim Conway) and the rest of the oddball crew of PT-73 get onboard for one more season of ship-tipping adventures.

Season 4 finds McHale and company relocated halfway around the world following their transfer from Taratupa Island to an American Naval base in Voltafiore, Italy. Between the scheming Mayor Mario Lugatto (Jay Novello) and Army Colonel Douglas Harrigan (Henry Beckman), reassignment isn’t all it’s cracked up to be, and with Captain Binghamton (Joe Flynn) out for blood, McHale has his hands full.

ALL 30 EPISODES FROM THE FINAL SEASON
Lieutenant Commander Quinton McHale (Ernest Borgnine), Ensign Parker (Tim Conway) and the rest of the oddball crew of PT-73 get onboard for one more season of ship-tipping adventures.

Season 4 finds McHale and company relocated halfway around the world following their transfer from Taratupa Island to an American Naval base in Voltafiore, Italy. Between the scheming Mayor Mario Lugatto (Jay Novello) and Army Colonel Douglas Harrigan (Henry Beckman), reassignment isn’t all it’s cracked up to be, and with Captain Binghamton (Joe Flynn) out for blood, McHale has his hands full.

From 1962 through 1966, McHale’s Navy was a must-see staple of television. This fourth season marked the finale of what has since become one of the true classics of television comedy.

For the first time, all 30 episodes from the fourth season are collected complete and uncut on DVD.

DISC 1
4.1 WAR, ITALIAN STYLE
McHale, his crew and Binghamton are all transferred to Italy. It doesn’t take long for the Captain to banish the men of PT 73 to a dismal camp ground outside the village of Voltafiore, but he is unaware the site is next door to a wine cellar.
4.2 THE BATHTUB THIEF
Disguised as an Italian family – father, daughter, son and mother – McHale, Parker, Gruber and Tinker play host to a German patrol after their PT-boat is disabled by enemy aircraft.
4.3 MARRIAGE, McHALE STYLE
McHale’s romantically inclined crew pressures him into using his status as a captain of a ship to perform a wedding ceremony for Gina and Vittorio – an enemy solider.
4.4 GIUSEPPE McHALE
With McHale off the base without permission, Parker uses the skipper’s look-alike cousin, Guiseppe, to convince Binghamton that McHale is suffering from battle fatigue.
4.5 A NIP IN TIME
When McHale and some of his crew are captured, Fuji falls back on Gruber’s stock of Japanese souvenirs to masquerade as a Japanese admiral.
4.6 PIAZZA BINGHAMTONI
Parker is clapped ion the brig when he spills spaghetti on Binghamton, so in order to spring their buddy, McHale and his men enlist the aid of a local sculptor, and Binghamton’s ego.

DISC 2
4.7 THE BALD-HEADED CONTESSA
McHale and his men appropriate the villa of the absent Contessa D’Arezzi, but when Binghamton arrives to invite the Contessa to his party, Parker impersonates the titled lady to save the men from court martial.
4.8 VOLTAFIORE FISH-FRY
After receiving a directive from the Commanding General forbidding the practice of profiteering, Binghamton suspects McHale and his men are right in the middle if it, and sets about to get evidence before the General arrives.
4.9 A WINE CELLAR IS NOT A HOME
McHale and his men fake an enemy air raid attack to save the beautiful antique furnishings of their wine cellar refuge from the clutches of Binghamton.
4.10 VINO, VINO, WHO’S GOT THE VINO?
McHale and his men booby-trap the wine hidden by the returning Germans, but instead of the enemy returning for the loot, Captain Binghamton finds the contraband.
4.11 THE McHALE OPERA COMPANY
Mayor Lugatto cons the boys into fixing up the opera house by asking Virgil to sing. When an air raid takes place during Binghamton’s performance, the Captain is convinced it’s McHale and his crew sabotaging his singing efforts.
4.12 THE GOOD LUCK FOUNTAIN
When Binghamton shuts down the Mayor’s money-making good luck fountain and throws him in jail, McHale and his men warn the Captain he has incurred the old Voltafiore Curse.

DISC 3
4.13 BLITZKRIEG AT McHALE’S BEACH
Colonel Harrington takes over McHale’s beach quarters as a personal playground by convincing Binghamton he should move them into his own quarters to improve their morale.
4.14 REUNION FOR PT-73
McHale’s men recite their many misdeeds into a tape recorder to starve off boredom, but when Binghamton finds the recorder, the crew try to convince him the war is over so they can retrieve the evidence.
4.15 THE RETURN OF GIUSEPPE
McHale ignores Binghamton’s orders to remain on the base and visits his look-alike cousin, Giuseppe, for a birthday party. When spotted by Binghamton he suspects McHale of black market activity and raids the house.
4.16 THE BOY SCOUTS OF 73
With McHale and his men in jail as suspects in the thief of Captain Binghamton’s ship’s clock, the skipper turns a crime wave to their advantage.
4.17 FIRE IN THE LIQUOR LOCKER
Captain Binghamton organises a volunteer fire department to impress General Bronson and appropriates the fire truck McHale’s crew is using as a still.
4.18 THE FUGUTIVE ENSIGN
Believing he has machine-gunned Captain Binghamton, Ensign Parker runs off and joins a gypsy camp. Binghamton leads the manhunt and offers a reward big enough to interest the gypsies in turning on Parker.


DISC 4
4.19 THE WACKY WAC
McHale and his men attempt to play cupid by reuniting WAC Cpl. Sally Murdock wuth her soldier-boyfriend, but she is arrested as a spy by Captain Binghamton.
4.20 LA DOLCE 73
Captain Binghamton’s plan to get the goods on McHale and his men by filming then at a wild party is upset when Gruber has the film edited to star Binghamton.
4.21 McHALE’S COUNTRY CLUB CAPER
Captain Binghamton takes $1000 from the recreation fund to get a golf course built, but upon discovering he’s been dealing with a con man, he offers furloughs to McHale and his men of they help to retrieve the money.
4.22 SECRET CHIMP 007
Captain Binghamton assumes he’s cracked a spy ring when he finds Parker with a chimpanzee carrying a stolen top-secret order.
4.23 36-24-73
A shapely member of Binghamton’s staff comes to the rescue when McHale and his ben get in big troubke over a beauty contest.
4.24 MY SON, THE SKIPPER
Binghamton takes advantage of McHale’s absence by putting Parker in command of PT-73, telling him to get tough, abnd giving the crew the choice of a suicide mission or transfers.

DISC 5
4.25 LITTLE RED RIDING DOCTOR
When McHale is drawn as winner of a contest to celebrate the 500th anniversary of Voltafiore, Captain Binghamton, who felt certain he would win, goes into a tirade during which he accuses McHale and his men of stuffing the ballot boxes.
4.26 WHO WAS THAT GERMAN I SAW YOU WITH?
The Germans capture Captain Binghamton while he is posing as a pistol-packing hero for a magazine photographer, then steal the uniforms of McHale’s crew and pick up Ensign Parker.
4.27 THE McHALE GRAND PRIX
Captain Binghamton’s campaign to enforce strict traffic control in Voltafiore conflicts with a motor-car race through the town arranged by McHale and his men.
4.28 AN ENSIGN’S BEST FRIEND
Captain Binghamton is determined to make an example of Ensign Parker for fraternizing, but he can’t get close enough to put him under arrest. Every time the Captain tries, he is chased away by a pack of dogs.
4.29 BINGHAMTON, AT 20 PACES
Captain Binghamton’s eagerness to catch Ensign Parker is an illegal duel with Count Spinetti lands him on the field of honor opposing the dead-shot nobleman.
4.30 WALLY FOR CONGRESS
Captain Binghamton’s moment of planned heroism, intended to impress visiting politician Big Frank Templeton, is ruined by an attack by McHale’s crew wearing German uniforms.
Less «