A special set of two 'Machine Lifeforms', from the hit game Nier Automata!

$99.95 Add to My Cart Processing...
Add to Wishlist Add to Collection

NieR: Automata™ depicts the struggle between invaders from another world that took over the Earth and the humans who are trying to win it back.

The autonomous robot “Machine Lifeform,” deployed by alien invaders is now available as a Bring Arts figure, with two included in this set!

The Machine Lifeforms, accentuated as weapons of war by their weathering, have many articulated joints, allowing a wide range of motion and making them an excellent piece to enjoy multiple poses, even in their compact scale.

This set features Machine Lifeforms in their hostile forms with red eyes, each have a large range of motion, and come with multiple weapon parts.

The gun, sword and revolving chainsaw are all weathered just as the Machine Lifeforms are, their coloration hewing even closer to the colors seen in the unforgettable world of NieR: Automata™.

Poses as a different version of the Machine Lifeform can be enjoyed by changing the leg parts, making these figures into a must-have set for fans! 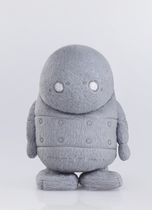 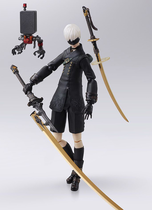 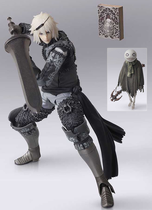