Television's favourite amateur sleuth, Jessica Fletcher, is back on the case... and back on DVD.

Collects all Seasons 1 to 12 PLUS The Final Movies Collection 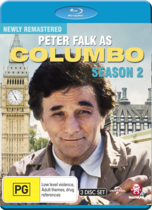