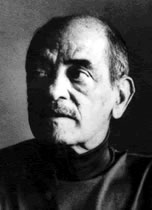 "Fortunately, somewhere between chance and mystery lies imagination, the only thing that protects our freedom, despite the fact that people keep trying to reduce it or kill it off altogether."

Born into a wealthy Aragonese family in Calanda, Spain, Luis Buñuel Portoles' formative years exposed him to the influences that would continue to be evident in his final works. Subject first to the strict educational regimen of the Jesuits, Buñuel entered the intellectual hothouse of the Residencia de Estudiantes at the Universidad de Madrid in 1917, where he met artist Salvador Dalí and poet Federico Garcia Lorca - two men who shared his passion for the avant-garde and the absurd.

Moving to Paris in 1925, Buñuel worked as assistant to director Jean Epstein before collaborating with Dalí to create Un Chien Andalou (1929), a film which casts a much longer shadow than its mere 17 minutes would presume. A year later, he and Dalí fell out over their next production, L'Age d’Or. Buñuel formally broke with The Surrealists in 1932, returning to Spain where he filmed the leftist/surrealist documentary Las Hurdes (Land without Bread), and continued to work as a producer until his Republican sympathies forced him into exile during the Spanish Civil War.

Lured to Hollywood, Buñuel found work did not materialise, and was forced to undertake Mexican studio projects. His 1950 masterpiece, Los Olvidados , won the Prix de la Mise en Scène (Best Director award) at Cannes, and marked Buñuel’s international comeback. It was only after the age of 60, however, that Buñuel entered an unparalleled renaissance, making what are regarded as his best films.

The monarchist dictator General Francisco Franco invited Buñuel home in the early 1960s, offering a free hand to Spain's most famous director. Giving voice to the obsessions that had plagued him since his education, the Palme d'Or winning Viridiana (1961), incurred the wrath of both the Vatican and Franco (who banned the film in Spain) for its scathingly acerbic views on the Catholic Church. Returning to Mexico, he revelled in the surrealistic ridicule of bourgeois paralysis, El Àngel Exterminador (1962), before being offered work in France by producer Serge Silberman.

Buñuel's French period, lasting from Diary of a Chambermaid (1964) until his 1978 retirement included many of his most renowned films - Belle de Jour (1967), Le Charme Discret de la Bougeoisie (1972) and Cet Obscure Objet du Desir (1977) - and displayed his lifelong preoccupations with the Church and the Elite.