WWE Champion John Cena hope to continue his championship reign against AJ Styles, Baron Corbin, Dean Ambrose, The Miz, and Bray Wyatt inside the punishing structure known as the Elimination Chamber. "The Viper" Randy Orton continus his Road to WrestleMania as he takes on Luke Harper! And the WWE SmackDown Women's Championship is on the line as Alexa Bliss takes on Naomi. Who will escape with their hand raised at Elimination Chamber?

And, for the first time ever, Universal Champion Kevin Owens meets Goldberg in the main event of WWE Fast Lane! Bayley looks to make her first title defense against "The Queen of Pay-Per-Views" Charlotte Flair in a rematch for the WWE Raw Women's Championship. "The Monster Among Men" Braun Strowman looks to extend his impressive undefeated streak against Roman Reigns. The Superstars of Raw get in the Fast Lane on the Road to WrestleMania! 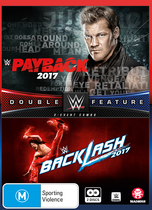